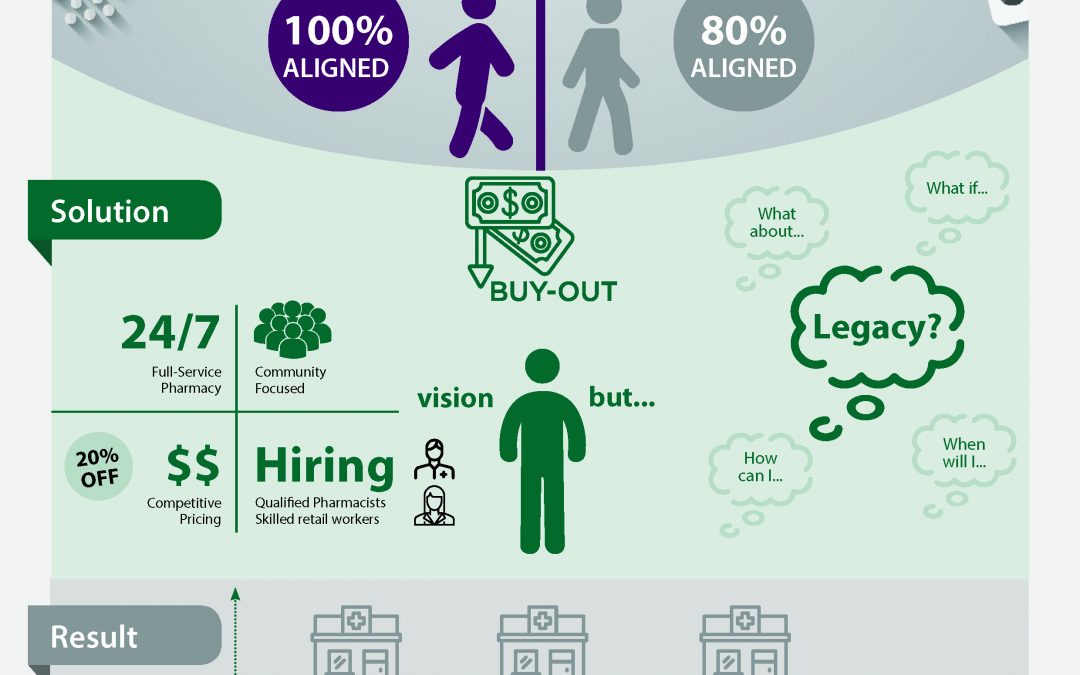 Whyalla, on the western side of Spencer Gulf, has seen plenty of ups and downs over John Cagney’s lifetime. He owns three pharmacies in the Steel City, and is deeply invested in his community. John came to me with two big problems:

Alone, each one of these issues warrants serious attention. But together? Sometimes the thorniest problems lead to the simplest solutions.

John had a clear vision for his business. He placed a premium on professional service and patient care. This meant offering the full gamut of services pharmacists provide, rather than just focussing on the most profitable activities. It also meant providing employment in Whyalla for qualified pharmacists and skilled retail workers.

At the same time, John knew he had to open seven days a week, while maintaining competitive pricing. With the rise of discount chemist chains, this was essential.

If you have a singular vision for your business, why compromise? If your partner’s vision is completely unaligned with yours, the solution is clear—it’s time for a divorce. But what if your partner is 80% on board, or 90%? Say John wished to serve the local aged care facilities, but his partner saw this as an unnecessary indulgence. Should John give up on his vision?

Of course not. John wanted to give back to the community, so visiting Whyalla’s nursing homes was not negotiable. It was integral to his vision for the business.

John and I talked it through. When I realised that John’s partner was not 100% on board with his vision, I offered one simple piece of advice: buy him out. This sounds like a big step, and John needed time to think it through. In the end, he knew it was his best option. Letting his partner know he’d decided to part ways—that was the hard part. Obtaining finance to facilitate the buyout? That was dead easy.

The second problem—feeling torn between Adelaide and Whyalla—loomed large. John believed he was betraying his commitment to the community. I asked him to think about his legacy. After considering this question carefully, John realised that by offering high care, cost competitive pharmacies, Whyalla would thank him—wherever he chose to live.

Using my Strategy to Cash and Who’s Who in the Zoo methods, John and I set up three autonomous leadership teams—one for each pharmacy—which embraced his vision. These teams were empowered to make the decisions needed to bring John’s vision to life. With the right people in place, John realised he could run the business from Adelaide. He was amazed how much time he won back. His labour intensity dropped right down, allowing him to focus on strategic leadership. He also had more time to spend with his family.

Breaking the chains of his old partnership proved decisive. Had John not taken that radical-seeming step, this transformation would not have been possible. But empowering his people was just as critical. With their leadership and John’s strategic oversight, the three pharmacies are setting down ever-deeper roots in the Steel City.